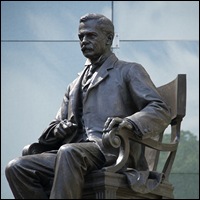 This historic bronze sculpture by renowned American sculptor Daniel Chester French is a memorial to Samuel Spencer, Southern Railway’s first president, and is considered to be the prototype for the Lincoln Memorial in Washington, D.C. Commissioned in 1909 by Southern Railway employees, the sculpture and its ornate granite base by Henry Bacon were originally located at Atlanta’s downtown passenger train station. After the terminal was demolished in 1972, the sculpture was rededicated on July 3, 1970 at Brookwood Station. It was relocated again in 1996 by CODA, and then again in 2009 to Midtown.