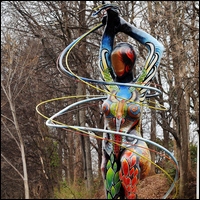 Gifted by The Chelko Foundation to Atlanta, "One Woman Rising" was inspired by Eve Ensler’s "One Billion Rising," a global day of action calling for the end of violence against women and girls. It was fabricated by Atlanta artisan Phil Proctor and Geo Brenick and painted by World Champion body painters Scott Fray and Madelyn Greco of Living Brush Bodypainting.