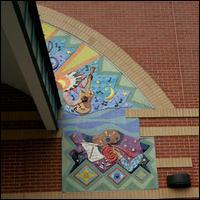 Using hand-sculpted and glazed ceramic tiles and mosaic glass tesserae, Donna Pickens has created whimsical imagery and bold abstract patterns that suggest rhythm, movement, music, drama, and the visual arts. In the center of the arch, a large sun rises; its six sunrays radiating across the building, dividing the mosaic mural into seven large sections. Sitting on top of the sun is the image of a masked African female figure, representing the Creative Source. From her, streams of color and energy emanate, implying the power of music and rhythm. Images of hands playing instruments, such as the saxophone, guitar, and piano, as well as musical and rhythmic symbols can be seen. Blue mosaic wave patterns honor Judith Jamison, of the Alvin Ailey Dance Company, and her unforgettable performance of the spiritual “Wade in the Water” many years ago. Other panels represent drama, writing, and the visual arts with images of masks, paper and pen, a palette and easel. New Sun Rising enlivens the entrance of Southwest Arts Center and welcomes people to take part in the creativity that lies within.