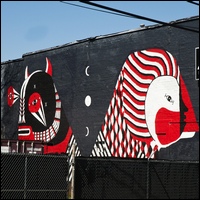 Street artist Fefe Talavera (São Paulo, Brazil) is inspired by the tribal art she discovered while working in the streets of São Paulo. Because of her hometown’s social and economic problems, the urban environment became dilapidated. Fefe took advantage of this negative aspect by utilizing the contradiction of her art to the destroyed walls in order to show the beauty of the community there. The monstrous characters shown in her works are meant to reflect human emotions such as anger and desire and send a powerful message to the viewer.