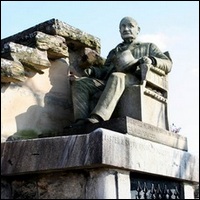 This portrait of Jasper Newton Smith depicts him at age 73. He modelled for this sculpture, and it was placed above his mausoleum during his lifetime. He has thinning hair and a moustache and wears a jacket, but no tie. Smith was an eccentric businessman who became successful in the brick business in Atlanta during the Construction Era, reportedly creating some 10 million bricks for Atlanta construction. Engraved on the side of the sculpture is “Jasper N. Smith Born in Walton Co. GA Dec. 29, 1833. A Noble Atlantan Who Built an Empire With His Own Hands”.