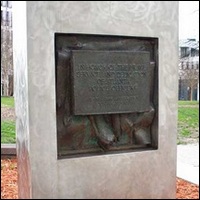 In the summer of 1979 until the spring of 1981, a series of murders committed in Atlanta rocked the nation. The Atlanta Child Murders, known as the "missing and murdered children cases," took the lives of 28 African-American children. During this time the morale of the city and especially the Atlanta Police Department was low. To help bolster the pride of the city, the Atlanta Bar Association commissioned artist Steve Steinman to create a monument to slain police officers. The monument, located in Woodruff Park, promotes an appreciation of officers lost in the line of duty and pride for their sacrifice. The highlight of the sculpture is a life-casting of a child’s hand holding the hand of a police officer. After an intense two-year period, the crime was solved.