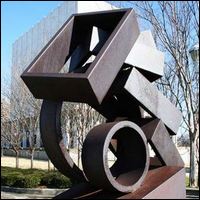 "Games" is an abstract steel sculpture commemorating the 1996 Olympic Games in Atlanta. It features five open boxes and an open circle positioned asymmetrically on a concrete base. "Games" marks the cultural exchange that occurred between the 1992 host of the Olympics, Barcelona, Spain and Atlanta, which followed Barcelona as host. It was commissioned by the Cultural Legacy Initiative, which brought this piece and other major permanent public works of art to Atlanta from Barcelona.