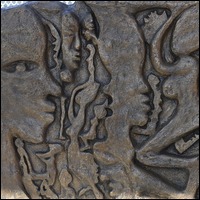 Artist Lonnie Holley was born on February 10, 1950, in Birmingham, Ala., the seventh of 27 children. As a young man, he drifted around the South and eventually settled in Birmingham, where he lives today. When his sister’s two children died in a house fire in 1979, the family could not afford to buy tombstones for the children, so he decided to make them himself. The Tombstones were Holley’s first works of art. He soon began to create an environment of found materials that he assembled in his yard. Holley’s materials for his works progressed from industrial-made sandstone to found objects to painting. In his conceptualization of human and animal forms and his strong emphasis on the spiritual world and ancestral heritage, Holley gives people a glimpse of West African, Egyptian and Pre-Columbian influences. At the same time, his abstract, geometric forms relate to the works of other 20th century artists.