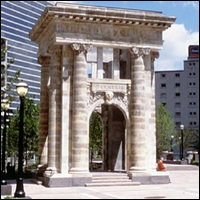 This beaux-arts pavilion was created from the intricate facade of the downtown Carnegie Central Library, which was built in 1901 and demolished in 1977 to make way for the Atlanta-Fulton County Library that now stands on the site. Fortunately, these architectural bays were preserved and ultimately used to create this elegant 23 foot square pavilion in 1996. In homage to the Carnegie legacy, it is a monument to higher education in Atlanta with the seals of nine local area colleges and universities embedded in the pavilion floor. The interdisciplinary design firm Jova/Daniels/Busby came up for a plan for the pavilion and handled its construction.