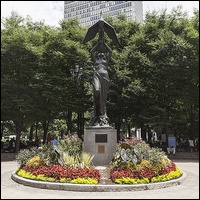 Considered the symbol of Atlanta’s rebirth, "The Phoenix" — as it is popularly known — was commissioned in 1969 by the Rich Foundation to commemorate the 100th anniversary of its historic downtown department store. James Siegler, who worked in Rich’s planning department, conceived of a sculpture of a woman lifting a bird of hope to the heavens, and drew the original drawings. Ultimately designed and cast in Italy, the sculpture became associated with the Phoenix, the mystical bird of Egyptian times, who was consumed by fire and rose from the ashes. Now the unofficial symbol of Atlanta, it represents the city that ascended from the ashes and devastation of the Civil War to become an important international city.