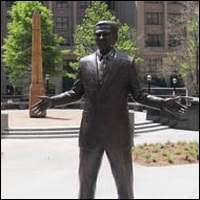 Atlanta businessman and friend of Andrew Young, Charles Loudermilk funded the "Andrew Young Statue" as an homage to Young’s role in the civil rights movement and many successes as mayor of Atlanta. Though the statue is about one-and-a-half times larger than the 5-foot, 8-inch Young, he has an open and inviting pose that seems to welcome people to the city. Harris said he purposely was not put on a pedestal. “He’s a man of the people,” Harris explained. “If you want to be able to see this and relate to it, we needed him to be closer to the ground. That’s why he’s down there, so the people can be with him.” The statue commemorates the life and achievements of Young and his contributions to both the city of Atlanta and the nation.