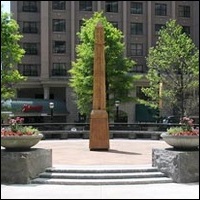 Then Central Atlanta Progress president, A.J. Robinson, expressed, “The vision for the Tribute plaza was to create a compelling destination that honors the contributions of one of our most important leaders. This serene park will serve as a point of reflection and inspiration along the path to Downtown’s major destinations.” Born in Shreveport, Louisiana, artist Curtis Patterson developed an appreciation for building, construction and working with his hands as the grandson of a master carpenter. Patterson’s early works generally involved painting, wood and ceramics, and his interests later shifted towards cast iron, steel and some large scale ceramic sculptures. Patterson’s works largely pay homage to the historical contributions of people of African descent.